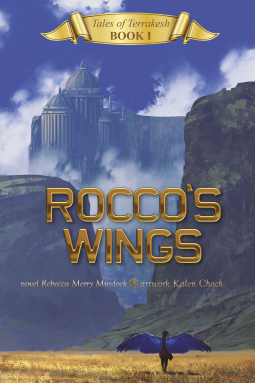 Getting into the story was very slow for me. I did not feel a connection to the main character. He could be anyone, other than the fact he has blue wings. The fact that he is bullied speaks to a lot of kids, I am sure, but otherwise… There just wasn’t much for me. Even the scene of Rocco’s mother’s death wasn’t particularly emotional.

This guy called Jafari is mentioned a few times as if he was a close friend, and then there’s his mother which I wasn’t even sure if she was still around or not based on the descriptions, but I also could not tell who they were. I found the expression bird eye vision quite repetitive during that time in particular but also later, and some descriptions were a bit hard to follow. I was very confused a lot of times, kept having to reread passages because I wasn’t sure how we got from point A to point B and often times I would still be confused. I think the transitions should have been smoother. But to be honest I can’t even tell if that’s because of the writing or because I lost interest so early on.

But yes, as the narrative developed, I constantly felt that I had missed something, as if I had jumped in in the middle of the story. I can’t remember any details at the moment, but I remember feeling very confused and it taking quite a while for the explanation of the things that made me confused to arrive. Stuff like why the ones who fled when Harpia took over died (apparently it was because of the separation sickness? Although it is said that Rocco had never heard of such illness but he knew they had died because they were away from their hometown? Why didn’t they just fly to Shale instead? They’d be together and therefore not die from separation sickness, right? At least if they had the venom to help with the process. I don’t know, that whole thing confused me, having to be stuck to one place in order not to get ill.); why Harpia let Rocco roam freely through the city, make friends and whatnot instead of locking him up as a prisioner or at least putting more guards on his tail (I get that she wanted him to exercise, but he didn’t seem to be guarded at all); why Rocco thought the white robes were evil, to the point where he wouldn’t even help them, even after they were so helpful and kind to him (Even though that’s what he was told all his life, we see him on several occasions realizing that was not the case – he even said it himself that the powder had a sort of brainwashing or hypnotizing effect, but it took Cirrus mentioning it to him for him to even consider that they might be nice). It took me a while to even get used to people being referred to as ‘robes’. That first description of Harpia had me pretty confused.

Besides what I mentioned before about the characters and being confused with the descriptions, there were some things that put me off a lot. Like how a 12 year old kid is able to fight and defeat full grown warriors (at one point he is even described as being stronger and heavier than an air marshall – how?? Sorry, to me that’s not believable at all.); how the characters, especially Rocco, are described as being at times a full day without food and it didn’t seem to affect them much; I also didn’t find the whole wing camouflaging thing plausible, be it with sand or mud – the way I see it, sand or dust or whatever would come off in mid-flight and mud would not even allow flight since it gets so heavy.

The ending was expected and I do appreciate that, although there is a glimpse of something for the next book in the series, it wasn’t a huge cliffhanger like we see so often these days and it’s great as a standalone book.

At the end of the day, it’s a fantasy book for kids. There’s plenty of vomiting (what kid doesn’t like that, right?), the hero is brave, his companions are enjoyable as well, they are all faced with hard decisions, like whether or not to leave a friend behind and I appreciated the whole dystopian feel to the story. I guess one cannot expect much character development in such a book, so even though I did not enjoy it much I’ll stick to the 3 stars because of the audience and because I am giving it the benefit of the doubt that it was my fault for not getting some things because I was distracted, since I could not get into the book. I wish there were more illustrations because they were very pretty. I do wish many young ones will read it, I am sure they will enjoy it and the following books in the series.