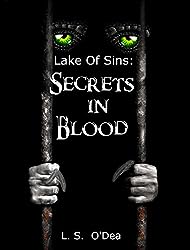 Secrets in Blood is the sequel to Escape, part of the Lake of Sins series, where we meet Trinity and her breath taking fantasy, dystopian world.
In the last novel, Trinity discovered some very harsh truths about her reality, and this book follows up where Escape left us.

This was, as the previous book, quite a ride. As before, I loved many things:

– Trinity, our main character is quite likeable. She is honourable, and as Mirra keeps telling her, has too many friends. She keeps wanting to help all creatures, even under the most dangerous circumstances, but she is very mature about it most of the times and therefore tries to think things through, not going into the situations blindly, so her instinct of self-preservation remains most of the time. When she does attempt to rush things, she always seems to have someone around to help her through. So she is innately good and inspires others to be so as well, even during situations where they would naturally act in a different and even opposed manner.

– The different species or classes are something utterly new and remarkable to me in the genre. They never cease to amaze me. I would like to stress out the relationship of Mirra and Gaar; it is truly fascinating. The perfect balance between rational and animalistic features of most of the classes is something that keeps me anchored to Trinity’s world.

– There is a plethora of characters, but they all have their own voice and so it is very easy to follow who is who.

– The world development is superb. I could clearly picture everything and it made sense, though it’s all fantasy. The scenery where action took place ranged from beautiful to scary to disgusting, amongst others, but always able to make you feel like you are there and was, at times, quite overwhelming.

– The narrative is action packed and large sections of it are page turners. You just cannot stop until you know what comes next. On the other hand, there are bits of humour which made me even laugh out loud on a couple of occasions.

– It is a very thought-provoking book. It subtly approaches subjects like vegetarianism (What meat do you eat? Do you know how it is treated before it gets to your plate?) and, less subtly, ones like the struggle between classes, with some thinking they are above others (Almightys view all other classes as their serves and below them in all aspects).

This author has a unique writing style. The book is narrated in the third person, but each chapter focuses on one individual most of the times. Because of that, when the author uses the pronoun he or she, she is actually referring to the character the chapter focuses on most of the times, which can get confusing because it is not always done and because the last person referred is very often not that character. But it really is just a matter of getting used to it.
However, it also means that we don’t really get to know much of what is going on in the minds of those ‘secondary’ characters, which I find a shame, since it would bring an additional dimension to the story, knowing what the others thought and felt about certain situations.

There were a few things that bothered me throughout the book. Since the narrative did grip me, I didn’t take notes, so I will try to remember a few examples:

– So as I mentioned, I felt that I never really got to know what went on in most of the characters’ minds; it was mostly all Hugh and sometimes Trinity and Jackson (though I felt a lot – too often, really – revolved around him brooding over not being able to ever be with Kim), sometimes Mirra and Gaar but not nearly as much as the previous book.

– The timeline would jump back and forth (like when Jackson leaves Trinity to get to Casper but we are told first of when he meets Hugh, which chronologically was later), which was not exactly too confusing, it’s just I wanted to know what came next in the order it happened.

– Some scenes/explanations I consider important were skipped, like how Jackson managed to convince the other guards to come with him.
The most important thing I would have liked to know though, was how Hugh’s house was bombed and who did it. I don’t understand why that was not explained.
The explanation for Jethro’s surgery was beyond too simplistic, I kept hoping there was some twist to it because Conguise’s explanations about it being non invasive and that he would be walking in a matter of hours seemed too good to be true.
There were a couple things here and there that didn’t seem to be in tune with the class characteristics to which some characters belong, but nothing too important.
I also don’t get why Reese is described as a cross between some type of hunting Guard and Araldo only knew what else, when Hugh, as well as pretty much everyone else, believed at that point that it was not possible to cross breed between species.

– Things got a bit repetitive, particularly in the middle, with all the lines about how interclass relationships/offspring would never be tolerated by society and how Benedictine would never allow his family to mingle with other classes, but also certain expressions.

– Then there was Jethro and Trinity. The contact they had in this book, particularly the scene where the two were separated by the cage bars, was a bit too much. From the first book and even this one, I felt they did not know each other that well to act all love- dovey with each other. I mean yes, Trinity liked him because he accepted her for who she was and he, well, he liked her on a first instance and she did save his life but come on, they met once before all that.

– If there is one thing I could point out is that the emotional side of the book could use quite a bit of improvement, not only in the example above to show progression of feelings but also when someone dies. Particularly the deaths towards the end of the book, there should have been a bigger reaction to them, in my opinion. Conguise is a bastard but he is also a father; he should have been heartbroken and I can only remember a single line from him, not even much of a description (this is an example of where I miss knowing what is going through the secondary characters’ minds). And Buddy… He really grew on me throughout the book – and yes, Hugh was angry enough to attack the Stocker, but I still felt there should have been something more there. He deserved more, both then and afterwards when things quieted down. I’ll miss that character – his blind loyalty mixed with cheeky humour made him quite unique.

– The book could use an edit, particularly when it comes to punctuation. Often times there were questions ending in periods, for instance, as well as a few misspellings, here and there, but nothing major.

I wish I could give this book 5 stars. But considering what I mentioned above, it is a solid 3.5 stars for me. I am rounding it up on GoodReads and Amazon solely because I enjoy this world a lot more than other books I rated 3.5 stars, but I did not enjoy it as much as the first one.

Even so, please don’t be misled! It is still an awesome book that DOES deserve your undivided attention because, despite all the flaws, it is a pearl in the universe of dystopian fantasy out there. I can honestly say it is free of most clichés which riddle other books (I will ignore the love triangle thing because it has a minor presence in the story).

At the end of the day, I am very happy I read it, and cannot wait for the next book in the series.