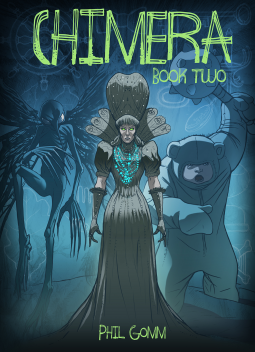 In the sequel to Chimera Book One, Kyp will keep trying to save the trapped children from Madam Chartreuse’s grasp, while dealing with betrayal and struggling to find allies he can trust.

I enjoyed this sequel a bit less than Book One, but it was still a fun read.

In Book Two, we find that the villain(s) are not just plain evil, they are actually smart and very organized, particularly the leader. She does not have only two sidekicks, there are plenty of bad guys by her side… Or are there?
Kyp finds some unexpected allies and gains new enemies, as he tries to unveil just what exactly is going on. In doing so, he will find someone he never expected to see in Chimera and things will definitely get interesting. Emotions will soar high, decisions will be made and consequences will have to be dealt with.

In the previous book, we were introduced to a wondrous, whimsical, fantastic world, inhabited by strange critters with very peculiar characteristics, wishes and agendas. Chimera justifies all sorts of things, like where things and even humans go when they are lost, and where all sorts of superstitions have perfectly reasonable explanations. But now we are in this world, the explanations of how it works are pretty much done and I found myself in the middle of a narrative focused on plot and action.

Some of the things I found lacking in the first book are repeated here, along with a couple of new ones.
Here is what I can remember put me off a bit:

– There is a lot of stuff to remember. Many characters, quite a few places, several agendas.
– There isn’t much tension, no actual build up. It’s just a sequence of action scenes interspersed by breath-taking descriptions. For instance, when Kyp loses his Elsewhere Light, I wanted to feel panic. Yes, it’s important that he tries to save the children, even though he said he had no intention of doing so and just wanted to save Joe, but doesn’t losing his Elsewhere Light mean he will be forever stuck in Chimera? So I guess I wanted a bit more drama, maybe, or rather a progression of emotion. I wanted to actually feel that all was lost and then find closure as we finish the ride, while this way it’s almost like we know the main character will find a way to fix the situation so we needn’t worry.
– There were several grammar mistakes – plenty in the last chapter alone.
– There were just too many plot twists. A lot of betrayals and re-betrayals and then traitors who were not traitors anymore and it was just too much.
– Characters supposedly dying and then coming back always puts me off, and I can tell it is going to happen again.
– I am still not sure how to feel about the development of Mistress Chartreuse’s character. In Book One, she was portrayed as being truly evil and no one (at least children) can resist her because of her green eyes power thingie. Here, she is a fallible character, seemingly easily deceived about those she trusts the most. I lost quite a lot of respect for her. I can understand that her power does not work on Chimera’s inhabitants, but I think a true villain needs to have much more discernment than she has shown. She did not suspect any of the traitors. She was reduced to a wailing frail thing in the last scene where we saw her. It just didn’t do it for me.
– I was disappointed in Sprat. For the entire first book we hear Kyp saying how much he loves his best friend and when they finally meet she isn’t even happy to see him and even though she remembers her old life now it’s like they don’t even have a history together, if she is that ready to doubt him.

So all that left me a bit lacking I just did not feel very engaged with the story. Personally, I would have preferred a sequel which would have allowed me to further engage in the world of Chimera, and for the main villain to remain almost untouchable, if you know what I mean. Unless, of course, there is even an even bigger villain behind the curtain, but I don’t think that will be the case.

In the end, this is a children’s book, and I find myself again believing a child would enjoy this a lot more than I did and that their enjoyment would not wane in the least because of what I mentioned.
I am, however, unsure of the target audience. There were brief references to torture and death that I am not sure really young children should be reading.

I did enjoy this sequel. I breezed through it and truly enjoyed some bits and pieces, particularly the sequence about the onu-weed, amongst many others.