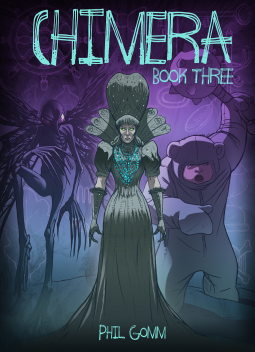 In Book Three, Kyp will make it his mission to save the Panoply from the clutches of Chimera’s evil creatures and find them the way home. He will learn of prophecies, deal with new villains, make new friends, and find closure to a lot of problems. However, his adventure is not over yet!

Book Three brought back some of the magic that I had been missing from Book One.
It started really well. I was enthralled by the dual narrative in that first chapter, and wanted to know what was happening to Kyp.

I also enjoyed the story’s development. There is conflict, and we realize our main character is not perfect. There are some very scary moments (kissie-wissies!!) and I can never get enough of the author’s imagination and his way with words. I mean, who would have thought to compare hanging lightbulbs to an orchard of electric pears? Brilliant!

This third book does bring some closure and explains some things from the previous two. However, there were other things I would have liked to have read about. I wanted Kyp to tell Sprat he was sorry for making her feel the way he did. And I never got what happened to Wendell’s picture, which captured his Elsewhere Light, or maybe I just missing something. I actually thought Kyp would use it, since Wendell did not want it anymore. Instead, he and Sprat risk something which could have left them in limbo, without so much as a second thought.
I also did not get the implications of apprehending someone’s Elsewhere Light in a picture, and then someone else using it too. I thought that the Elsewhere Light was something unique, what links each child or object to the real world, because it means someone is missing them. When those people stop thinking about them, then the light goes out. So then what does having their Elsewhere Light taken mean? That those people will have forgotten about them? That didn’t seem to be the case with Kyp’s parents…
The characters also seemed to get out of very nasty situations a bit too easily, but since it’s a children’s book I won’t be too demanding about that.

So, in a nutshell, this is obviously meant as a series and not a trilogy, and despite everything I mentioned above I for one am quite eager to find out what comes next. Who knows, maybe Madam Chartreuse is Kyp’s birth mother? It would be cool if his birth parents were somehow linked to Chimera as well. And I definitely want to know who or what that Deity is. And why Kyp had a deja-vu feeling when he entered the warehouse. Had he been to Chimera before and forgot about it? And just who the heck is Saint Anthony and why was he at Open Sesames? Kyp recognized him, he said he had been there, so why didn’t he ask him then? And what bad consequences will come from getting all the children home at once? I want to know all that and more, so I am looking forward to the next three books of the series.

I recommend that you read the first three books of Chimera if you are looking to get lost in a great fantasy world, regardless of your age.