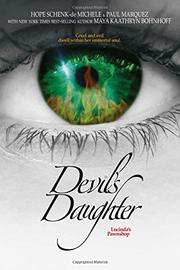 Lucinda manages a very special pawn shop, that only people who are at a moral crossroads can see and feel drawn to enter.
She is the Devil’s Daughter, but is she really like him?
When someone very special enters her life, Lucinda wonders if it is time to make a radical change, and be the rebel her mother intended her to be.

Heads up: this is going to be a short and probably odd review.

Did I find Devil’s Daughter extraordinarily original and mind-blowing? Nope.

Was the world building insane? Not really. It was interesting, sure, but not very elaborate. Some notions were not that clear to me, like what exactly the Between was and why some beings could change it, and I thought that the ward thing was an easy way out of situations which really could not have been fixed in other ways, for instance.

Were the characters incredibly well-developed? Not so much. Lucinda is supposed to be the daughter of Lucifer and Eve, though I did not really get much of a sense of a millenia-old creature. And Nathaniel was supposed to be this being who no one could really tell what he was thinking, his face never, ever shows emotion, and yet he had a couple of lines which seemed a tad out of character, particularly the humorous bit about a match made in Hell. There were definitely a couple of questions that Lucinda asked him that I don’t get why wait millenia to do it.

So why the 3.5 stars, even rounded up? Quite simply, because the story carried me away. It is obviously a plot-driven book and that is ok. Even with its flaws, it made me want to keep turning the pages and find out what came next. All the characters were interesting in their own way, the powers were cool, the premise reminded me a bit of Stephen King’s Needful Things and the sheer idea of Satan only being able to influence people but not force their will has insane possibilities, and I do think it was explored well in the book. It was very intriguing and interesting to watch how his plans came together, even if I did not get closure for several of them.

I wasn’t happy about so many things being left unanswered but I understand it – after all, this is only book 1 in a series. But I still had a great time reading Devil’s Daughter, and I would definitely like to know what comes next.