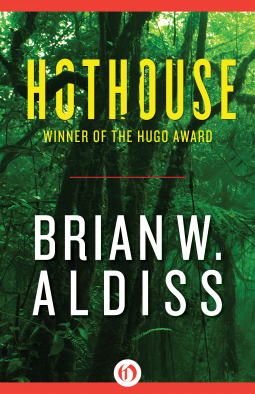 Two thousand million years into the future, humans are an endangered species, and only a shadow of what they used to be. Vegetation rules the globe. When a tribe’s children are left on their own, they will try to survive through all the dangers.

I have to admit I had trouble connecting to Hothouse.

First, the characters. I was not a fan of the whole Tarzan vibe, although I understand it. There isn’t much to these semi-savage humans but trying to survive, so it’s natural that, with such a decreased intelligence, abilities would wither, and myth and tabu would rule their lives. I just did not appreciate much people dying so easily or getting separated, and it is no big deal because it is the way. So while I understood it, I did not like it. But I hoped there would be some character growth or at the very least new ones that would make up for it, so I endured.

Then, the world building. I cannot conceive our planet being able to sustain life having stopped spinning. At the very least, how could there be any wind?? Or any kind of weather at all. How could a jungle thrive if there was no rain (at least I never read about raining there) and the sun was blazing scorch?

Monsters being able to transverse from Earth to the Moon through cables is just about the most ludicrous thing I have heard in a long time. It took me a while to accept that premise, as with others, like being able to access Humankind’s collective memory through one human’s memory.

And then I have this thing where if I am reading about a world utterly different from ours, I don’t want to be reading analogies to what is in my world. I feel the author should be able to describe things in another way, without having to resort to that. Yet, here I was reading about chained dogs, shaggy balloons, snakes, castles, pineapples and even sandwiches and I am wondering how the heck the characters know what all that is.

It was interesting to see how a society with a majority of women would operate. However, I would have been much more interested to know why exactly men had become so rare. Still, it was intriguing to see women trying to protect the few men because they were considered so fragile and could never be in harm’s way. I would have liked to know how pregnant women were treated, though. And when the characters transitioned from this tabu, I would have liked to see them acknowledge it, because it’s like at some point it just stopped, even though it was ‘the way’. Women kept being referred to as weak, dumb beings and I don’t get why.

A bit before half the book, the story started picking up, after the fungus came into action. I finally began somewhat caring about what happened to the characters and wanting to know what came next.
I was heartbroken by what Gren did to the Tummy-Bellies and I suppose that was the highlight of the book for me, because it was the only time when I actually felt something.
Then even those characters just started annoying the hell out of me, but I suppose that was intended.
I was sad for Gren and Poyly, who needed guidance but not possession. And Yattmur was a good character as well, due to her sensibility and altruism.

I wish I would have read more about Lily-yo – that storyline thoroughly intrigued me.

Most of all, what really kept me from getting into the book were two things:

– The writing. It was a constant rambling, which seemed to go on and on forever at times. That prose was just not something I could enjoy and kept getting in the way of the story, at times completely losing me. And there wasn’t even much of a plot. The characters just kept being moved from one place to the next, without there being much to it. I can say there was some character growth, even with all the clutter, but not nearly as much as I had hoped and, to be frank, it all seemed sort of pointless to the point where, if there were any plot twists, I did not notice them.

– The insane amount of vegetation named, particularly in the first few chapters. And the sad thing is maybe the author did bother to describe all of them but there were so many and with such odd names that after a while I had not a clue what I was reading about and I kept wondering when stuff would start to get exciting. Example :

One of the paperwings alighted fluttering on a tuft of emerald foliage near the watchers. The foliage was a dripperlip. Almost at once the paperwing turned grey as its small nourishments content was sucked out. It disintegrated like ash.

I liked that passage. However, I would have liked it even more if I could actually form in my head a clear shape of those things. Those weren’t even among the weirdest names, by the way.

The ARC clearly needs some editing. Some passages were very repetitive, both in words used (lie there quivering on the quivering green, cemented into place with the cement distilled(…)) and whole explanations. For instance, 94% into the book, I was reading about transversers as if it was the first time they were introduced; the entire description was redundant.
Some characters should be referred to as he, and they were as she, and vice-versa. And little things here and there that just needed to be tweaked.

In the end, getting through Hothouse was a labour. I am rounding the rating up because the world and characters were inventive, even if they did not make sense, but it was just not a book I could say I enjoyed reading.