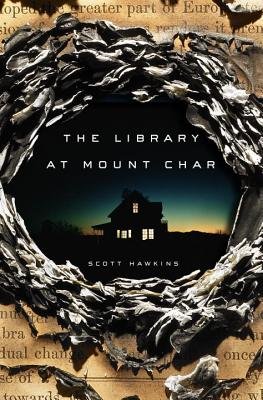 Title: The Library at Mount Char

Carolyn has lived in the Library since she was a child, when her parents were killed. She and several other children are assigned their own catalog, under the tutorship of Father, a man they have grown to respect, fear and even hate. One day, Father goes missing and they are kept out of the Library. While trying to adjust to the outside world, Carolyn and the others strive to find out what happened to Father.

What a weird ride! This book had my eyebrow cocked from the first page. Just when I thought I finally figured out what was going on, the author would flip everything upside down again.

When I first started reading Library, it quickly became clear to me this was a brand new fantasy concept – at least new to me. I had a difficult time getting into the book because I could not tell what this elaborate concept was, nor who each character was, their particular skills and personality, because several were introduced at once.

As I continued reading, I found that these characters were taken to the Library as children, and each of them specialized on studying a ‘catalog’, which I suppose can be deemed as a particular subject. They are not supposed to talk about their catalog with anyone, but our main character Carolyn has an inquisitive mind and we end up discovering a bit about each of them through her eyes.

Carolyn was intriguing. She seemed to lack any sort of feeling or emotion, and some of the things she did chilled me to the bone. She was a creepy main character, in a refreshing, good way, because her detachment never once felt forced. I gotta tell you, I cannot remember the last time I enjoyed disliking and respecting a main character this much.
It was obvious that Carolyn struggled with keeping her plans a secret. I was always clueless as to what these plans were and felt content following her around.

About a third in, I started getting really excited. The inclusion of Steve in the story brought the realism I needed. Him and Erwin trying to figure out what the hell was going on brought some serious fun to the picture and I found myself muffling my chuckles on more than one occasion. Who am I kidding, I actually laughed out loud several times. The lions. The vet. And oh, so much more.

The book’s structure never ceased to amaze me. Once I was past that initial bemused state, I got really comfortable, even if I did not know what the heck was going on. Up to the final third, I had a blast. I laughed, I was excited, I simply could not put the book down. Then I felt the book started dragging a bit and that everything came too easily for Carolyn. It also seemed that the major plot twist came much too soon and what the heck could possibly go on during the rest of the book but you know what? In the end most of it made sense and was wrapped up nicely. So it was not the usual formula of set-up/development/plot twist/end. It was so much richer than that. I really appreciated it.

Well, there were a few things that did not make much sense to me, like how Steve could have been resurrected if his heart had been taken out to later give to the tiger whose name I cannot possibly pronounce or how Carolyn controlled the dogs if she hated them that much or why she allowed Dresden to die or why they could not find Father in the forgotten lands or anywhere else but, overall, this was the best time I had reading a book in a long, long time. It surprised me so much and I was able to forget my surroundings so easily, which always speaks volumes towards the quality of a book, in my opinion.

The ending brought me closure and, although the epilogue hints at a sequel, I was perfectly content reading this as a standalone. And alas, this is a rare occasion where the book’s content matches the quality of the cover or even surpasses it. I highly recommend The Library at Mount Char. Don’t miss it!

Disclaimer: I would like to thank the publisher, Blogging for Books and Netgalley for providing me a free copy of this book in exchange for my honest review.

13 thoughts on “The Library at Mount Char”