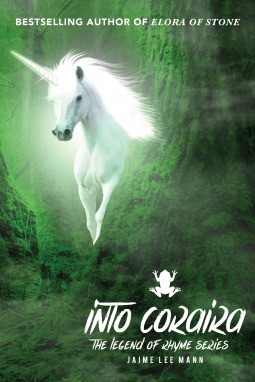 Title: Into Coraira (Legend of Rhyme, #2)

After having defeated the evil one, twins Asher and Ariana are now reunited with their parents, and all finally get some answers regarding the truth behind the curse.
Now, a new evil has been unleashed. While learning they have new powers and learning how to use them, Ariana and Asher will try to keep the kingdom of Coraira and all the realms safe.

I found the second book of the Legend of Rhyme series generally more enjoyable than the first one, in part because there were more answers. The imagery was, again, stunning, particularly of Coraira. I am sure little girls will absolutely love the unicorns and beautiful streams and flowers and animals, and the boys will appreciate the dragons, for instance. I for one grew fond of Wink and Fidget, although I felt Fidget’s character changed a bit since the first book but the fact is they were hilarious – and particularly liked the living map.

It did not fully satisfy me though, and not only because it is a children’s book.
For one, it presents a lot more characters than the first book and I have to admit at some point I did not know who some were any more, let alone how they were related.
There were also a few things that felt off for me:
I did not understand why Ariana was immediately Calla’s successor and Asher was not even considered.
I was not a fan of the thing with the pendants, especially if Ariana’s power was that great she should be able to come and go as she pleased once she trained enough. I felt some other explanation should have been given for her not to be able to return once she made the decision to become Calla’s successful and go to Coraira.
Similarly, I did not get why the twins would take their grandmother there when she was simply tired and would obviously recover if she rested, and knowing they would not be able to use the pendants again.
And finally, I have to admit I did not like the thing with Asher’s voice. It gave room to a funny scene, where his voice sounded older, but it just sounded like an easy escape of the situation. Now I am left wondering what will happen to Asher’s voice, the real crystal. Or why the crystal they used was green when Calla said the spell turned the crystal blue.

I know it’s a children’s book, but I feel some scenes should have been better elaborated. For instance, the thing with Rebecca’s reaction to the bee sting could have been more dramatic and yet it was over almost as fast as it began. It’s the sort of thing that I don’t think would hurt the book’s audience much but might actually reel older readers in. It didn’t have to be gross or very detailed, just a bit more of a build-up, so that the resolution had more impact. Instead it kind of renders the magic almost meaningless, as if too easy.

Overall, I had a good time reading Into Coraria and the ending left me wanting to know what happens in the third book. It looks like it will become more contemporary fantasy, which is a great, unexpected twist.

One thought on “Into Coraira (Legend of Rhyme, #2)”