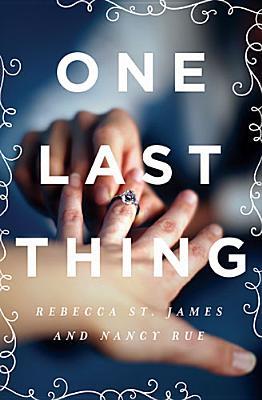 When Tara finds out her perfect fiancée is not so perfect after all, she needs to decide what to do. She is torn between standing by him and protecting herself and the ones she loves. His secret would destroy everyone’s world. Can she stay true to her promise to him that she won’t tell?

When I first started reading this book I was pretty confused. How were these two getting married? She asked stuff like Don’t you have any normal milk in here? while opening his fridge and practically swooned when looking into his eyes.
There seemed to constantly be something along the lines of:

An oatmeal-colored crumb escaped and rested on his lower lip. Lucky crumb.

This is a girl who has been dating this guy for three years. Come on.

So then I found out they were not living together, mainly because of Seth’s Christian values. I guess it made a bit of sense but did not really justify that sort of thing, in my book.
The main character kept telling me that she had been in love with this guy since she was 15 (so ten years prior to narrative) and yet I could not tell that she knew him at all or what exactly she loved about him besides his great looks.

I guess one of the main issues I had with this book was all the insta-love, particularly when Tara was the object of affection. I never understood why anyone fell for each other, either in the beginning or later on.

I actually enjoyed reading the novel when new things or people arrived to Tara’s life and secrets were being uncovered.
I have to admit I had already anticipated most of the revelations, particularly the major ones, and I never really connected much with the main character as you can probably tell by now, although I could see where her struggles came from.
It’s just that she came across as this self-loathing, rich but supposed to be normal, just a cutiepie girl. She is just plain perfect and has great manners and values all the great things in her life. She also has very perfect, understanding, modest parents and even if her mother was the queen of denial she always had great intentions at heart.

So a lot of the time I was reading about Tara calling herself names and then later on someone patting her on the back saying there there don’t feel that way. I suppose it is very realistic in the way that people who are struggling through something which is not even their fault may feel guilty, but I really have this beef with perfect characters.

On the other hand, Seth’s parents were portrayed as unnecessarily evil in my opinion, each in his own way – mother just plain aggressive and father more manipulative. They felt like caricatures to me and obvious alliances were formed from the get-go.
I was sad to see there was no redemption for either character in the end. I would have appreciated some growth.

Alas, the story developed into one of self-empowerment and respect, of valuing true friendships and not being afraid to be happy and also the true meaning of having God in one’s life and how the way He operates is not obvious.
As I mentioned, I did appreciate the mystery aspect. Everytime a new revelation was made, even if I had already predicted it, I felt compelled to keep reading, to see what happened next and which decisions the characters made.

In the end, it was mostly the perfection aspect and the few drama scenes/clichés that hindered my enjoyment. I gotta tell ya, there were some pretty lame lines.

The man’s footsteps echoed in the alley as he came lightly down the steps. They paused near me. I died several deaths.

Eurgh. The main character plainly irritated me and this is a case where I think different voices would have contributed to a stronger narrative.
Also, I did not really get the closure I had hoped for in the end.

The love triangle with Ike seemed beyond forced and, again, insta-love. It’s like one minute Tara is nothing more than a very efficient worker to him and the next she could be the mother of his children. What?? I have to give kudos to the author that they saved till fairly late in the book but still it was simply ridiculous and nonsensical.
I also never got what the deal with Evelyn was, what exactly she saw that would make her hate her brother that much.

Ultimately, the book had a good message and I still enjoyed reading it.

One thought on “One Last Thing”