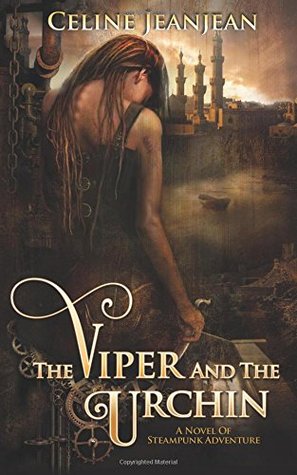 Title: The Viper and the Urchin

The Viper is a quirky assassin who wants to be famous. Rory is an urchin who relieves people of their belongings with the goal of becoming a great sword master.
When their paths cross, a wondrous adventure will begin.

This book was unique, for sure. It’s steampunk all the way and some of the descriptions are very interesting and will grip you.

One of our main characters is an 18-year-old urchin who looks and acts like a 14-year-old.
The other is a dandy assassin with a love for poetry, who cannot stand not being dressed properly or the sight of blood.

This Viper character is an odd one indeed. He kills people but only with poison he makes himself and claims no one does it better – amongst other things. Most everyone is below him and he makes sure he shows that. I have to admit I never really got why he killed. But following him around was fun. For instance, his leaving his mark before the poison truly set in because he did not want to deal with the nastiness of its effects. And if blood was involved… Well then, poor little Viper would not be able to handle it at all. Not a pretty sight.

Rory has no manners and does what she has to survive. I did not find her as interesting as the Viper, probably because I did not get as much backstory but it was an interesting ride. I have to admit I did not enjoy the story quite as much as those two bantering. That was definitely the highlight for me. I even laughed out loud on a couple of occasions.

But don’t get me wrong, there are several great things in this book and, as I mentioned, it is quite unique, not only due to the quirky characters. There are also no love interests! There are no predictable twists and turns and I did enjoy it for the most part.

There was just something about the novel that did not cause me to engage with the characters, particularly Rory. I really think not knowing her backstory had a great deal to do with my lack of enjoyment at times. The lack of development of other characters also put a dent in it. I guess it took me so long to get through the book that, though the world creation was very well done, the fact that most of the characters felt like strangers to me didn’t allow me to enjoy the novel as much as if there had been such a set up, as well as a better wrapping up of the story. The Old Girl said that Myran was caught but last I heard she dove in the water.

And I never really got why it was so obvious that the doctor who had died in the baths had been the one to create the poison who killed the other guy.

I recommend The Viper and the Urchin if you enjoy steampunk, mysteries and are sick and tired of romance in YA.

3 thoughts on “The Viper and the Urchin”