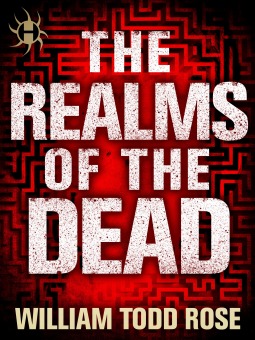 Title: The Realms of the Dead: Crossfades and Bleedovers

Two horror stories about life after death and one fellow whose mission is to help innocent souls across… Until everything goes horribly wrong.

The first story The Crossfades was not only horrifying but the concepts were very intriguing. We are all familiar with the notion of making sure spirits get to safety, or to the light, or whatever you want to call it, but it is done in a completely different way here. The concept of Sleepers, for instance, was new and very creepy if you ask me, as I could never be 100% sure what they felt.

The way the world works is fed bit by bit as we go through a day in Chuck’s life. At times he would convey the information by mentioning ‘The Handbook’ and that was when I would know what exactly was going on and how it was supposed to work.
Well, almost exactly. Little Chuck was way over his head with this one.

The story was bone chilling, suspenseful and turned intensely macabre at times, which I actually enjoyed, because that’s good horror in my book.
I found the main character very relatable, as well as the second most important one, and that made me enjoy the tale even more because they were just so normal but their circumstances sure weren’t.

There were a couple of things I didn’t get like , if the connection was one way, how did Chuck managed to tell Control to get him out of there that first time when he was reluctant to do so because it would go on record, or if time passed so much faster on The Divide than back on Earth then how could Control monitor is real life progress and tell when he should be calmed down or even pulled back, giving him direct instructions.
Others I just found too convenient, like Control being Lydia’s sister and the ending itself. The way Chuck was brought back was not convincing, nor what actually happened to Lydia, nor how they first connected like that in the first place.
In the end I was left with a lot of questions but overall it was a great ride. Thought provoking even, if you really stop to think about evil, for instance.
I found the story flawed in several ways but it was so entertaining.

Bleedovers is the sequel to Crossfades, so it gets repetitive at some points. As the previous story, it is bloated with suspenseful and macabre descriptions. The prose is truly amazing at times.

However, I did not enjoy it quite as much as the previous one.
First of all, Chuck gets promoted without any mention of it, just that he is now a level I Whisk. In the previous story he told us how he could not go to a job he no longer had, so I assumed he had been fired when in fact he had been suspended for not following things by the book. I am pretty sure nothing he did was by the book and since the ending seemed to happen out of sheer luck I was just so surprised about his promotion.
Secondly, there are simply too many ominous remarks of the kind that Chuck just knew for certain he was about to die. It happened in the previous story but for some reason, to me, in this one it was just overwhelming.
Thirdly, I hate going through a story where every character seems to support themselves on a premise I just know in my bones is wrong. It was always Albert Lewis this, Albert Lewis that… Eurgh. And last but not least I was just not a fan of how the story panned out. I cannot contemplate a child building up that much anger let alone power, especially if Bleedovers are supposed to be that rare. I would have much rather preferred that Nodens was the villain and that the Sleeper notion had been further elaborated. Ok, now we know they dreamed but what exactly was it like? What did they feel? For that matter, where did their soul go?

All in all I had a lot of fun reading these stories. I think Mr Rose has a wonderful prose that carries you away, he can weave horror tales beautifully and I would read more from him any time.

7 thoughts on “The Realms of the Dead: Crossfades and Bleedovers”