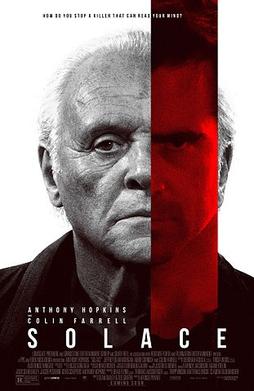 From IMDB:
A psychic works with the FBI in order to hunt down a serial killer.

Solace had quite a few strong points. Visually, it was well-directed for the most part; some shots were just beautiful and there were some neat tricks with the camera acting on the subjects’ abilities. The soundtrack was very powerful and had just the right intensity at the right time. There were wonderful scenarios, if brief, and there was what I would consider some mystery, since the trailer had spoiled it for me. And there were small touches here and there that were truly a delight.
It was also great to see actors I am so fond of again, especially all working together.

The movie had me fairly entertained to me up to a point. There’s this cop who knows a doctor who happens to be psychic and has secluded himself in a house in a breath-taking area since his daughter passed away. The cop is at a loss with a series of murders and asks for his help, since they are friends and all. As expected, the psychic guy (Hopkins) is reluctant at first – being a hermit and all – but finally gives in.

Now at this point something bothered right away: For a guy who would not even open the curtains on his house he seemed to fit right in, on the exact same day of his friend’s visit, in the middle of all the big city’s hustling and FBI headquarters or whatever they were.

Jeffrey Dean Morgan, Anthony Hopkins, Colin Farrell on their own were awesome.
As I said, I love those actors. For some reason, I just did not feel the chemistry.
I suppose it has a bit to do with Hopkins’ character. John was like Lecter’s good twin. Constant poker face and the few lines he said were either evasive or cynical or both but he is a good guy at heart. I get it, it was probably either void himself of emotions or go nuts with the constant visions of people’s past and future, not to mention his daughter’s death. And yet I still wanted more from him. It was like he almost gave up. I am sure he had several lines and yet after leaving the movie theatre for mere minutes I have the impression he didn’t speak much at all.

And the others… It’s like they flew by the flick. At times it was even like either not much happened or what did was repetitive.
Oh and then there were the usual car/foot chases and accidents because you just have to have that in every major blockbuster, right?

After a point, I was just bored. The plot isn’t new although there are a few interesting bits, the most obvious the killer’s intentions and whatnot. But the plot twists were either predictable or disappointing and the ending was, in my opinion, dismal. After such a build up, I had just expected more.

Nice try, though. Still entertaining. I had just hoped for more, especially with such a cast.

One thought on “Solace”