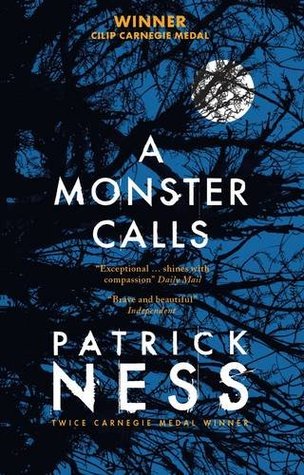 Thirteen-year-old Conor has had a terrible nightmare ever since his mother fell ill.
When a monster starts visiting him, he is not scared. That is, until it tells Conor what he wants from him… The truth.

I never knew children fantasy fiction could be weaved quite like this. This book had me intrigued, excited, curious and immensely sad. I wish I had gotten the illustrated version, since I have heard wonders about it.

The story stands on its own, though. Conor’s life was turned upside down ever since his mother got ill and he deals with it the best way he can, in all aspects of his life.

This is the first book I have read by Patrick Ness and I thoroughly enjoyed his writing. It was clear and unpretentious and yet it made me feel so emotional at times.

Conor’s character had a lot of depth. He is 13, dealing with a horrible situation that has several repercussions on his life. He is incredibly brave but he is also a young boy and I found him very believable. Most of the other characters were very well conceived as well, particularly his grandmother.

I am not giving it 5 stars because I was not quite swept by everything, such as Harry’s character for instance; I simply cannot see a kid that age choosing to bully like that or his father actually going back to America when he knows his son’s mother is about to die.
Also, it was fairly predictable and I am sure I would have related much more if I were younger.

However, as a whole this was a pretty amazing, emotional book about love, loss, grief and guilt and I think everyone should read it at some point in life.

One thought on “A Monster Calls”