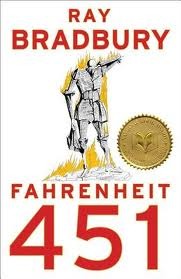 Guy Montag is a fireman. His job is to burn books. He is told that’s what firemen always did, starting with Benjamin Franklin.
Due to a number of events, Montag starts to get an itch, particularly after an odd girl asks him whether he is happy. Is he? He has everything he needs. He has constant entertainment. Yet, is he happy? Why are things the way they are? Can they change? Montag will find these answers throughout this short novel.

Well, let me just start by saying that this book is a classic for good reason. I had never read Ray Bradbury before and I have to admit I was amazed at what he created here – in so few pages!!

The evolution of the main character was tremendous. Even if the prose lost me at times because it became almost too poetic or even rambling, it was right for the character and sometimes so fast it was dizzying.
The characters were completely believable, if you stop to think about what they were submitted to, and so absolutely terrifying.
The setting is also well developed, how the world could get to that state.

But I wanted more, to be frank, as some things were just too simplistic or glossed over.
There were a few things here and there I was not comfortable with, like Guy leaving with all the books spread out – how could he not think his wife could have totally reported him, someone he came to realize was a stranger – or her friends could have come in time to see it – or his outburst towards said wife’s friends. I get that he was angry but he of all people should know how dangerous such an attitude could be. Also, when he escapes, isn’t he wearing his Fireman uniform? Doesn’t that make him an open target? Why isn’t that mentioned?.
The prose in the last 10 or 20 pages lost me quite often as well, the monologues were simply too long and I felt much of the same could be said with few words. It felt that, at that point, a lot of it was unnecessary and anti-climatic. The lack of women was also daunting, even if considering the time the book was written.

So for me the strength of the book is clearly in the beginning, particularly the interaction between Montag and Clarisse and his subsequent awakening to the world around him. The development of what he does with the knowledge he gained didn’t please me so much but it is an excellent book, one that will make you do some soul-searching and consider all sorts of things, and therefore I recommend it.

One thought on “Fahrenheit 451”