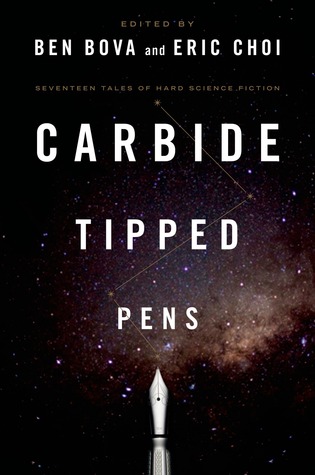 This collection started off really well. The Blue Afternoon That Lasted Forever was a touching story about a single father who is an astrophysicist. It had a near perfect balance for me of a good sci-fi plot and characters.
4 stars

The second story was heavier on the sci-fi and all about the plot. A Slow Unfurling of Truth takes place in a time where people can switch bodies, using them up in the process. I felt the world setting required something lengthier than a short story could provide, and I was never really enthralled by it, often times lost. The ending left me lacking as well.
1.5 stars

Sadly, I could not appreciate Thunderwell at all. When I first started reading it, it sure sounded a lot like the book The Martian, by Weir. A bunch of astronauts on their way to Mars, supplies being sent ahead, etc. When I found out what the plot was headed all my interest when out the window. Seriously, a nuclear powered slingshot? Or cannonball as the author put it. That premise is just so silly that I could not take the story seriously no matter how accurate the science was. The writing was unappealing and even irking as well, particularly the fact that the author kept saying the two main characters showed no emotion, over and over again. So yeah, probably my least favourite one of the bunch.
1 star

The Circle might have been interesting had I any appreciation for math or computing. I don’t. None whatsoever. But I can appreciate the effort. However, even though the story takes place in China, it didn’t have a Chinese feel at all…
1.5 stars

I don’t know the first thing about baseball but Old Timer’s Game was fun because it is one of my favourite kind of stories – the ones that really have you convinced something like that could happen.
4 stars

Snows of Yesteryears is a story about climate change and greed. There was also an air of mystery around the two main characters that I appreciated. It was ok, not going to stay in my mind for long.
2.25 stars

Skin Deep had a very interesting premise. The idea of getting automatically regulating medicine being tattooed into you is quite mind-blowing. Imagine having a certain allergy that, when coming in contact with you, your body would trigger the adequate response to it. When it all goes according to plan, that is.
I am not sure why that did not seem to be any heterosexual relationships in this world, but the development of the story was gripping and the twist at the end topped it off well enough.
3.75 stars

Lady with Fox‘s writing was awkward. Something about the phrasing and punctuation, I don’t know. It lost me all the talk about k-fibers and whatnot.
The basic premise in this world is that people are able to konn-ect while dreaming, leading to a very interesting experience, so they say. There was a hint of mystery throughout the story that I appreciated but I missed too much to be able to enjoy it and after so much build up I have to admit I was disappointed.
Insect gastronomy was interesting, though.
1.5 stars

Habilis was a story almost entirely composed of dialogue which varied between two timeframes. I suppose it was meant to give the story some dynamics but since during both times I kept reading about the same two characters carrying out pretty much the same actions I was constantly confused.
1 star

The Play’s the Thing is a really short one but to the point, about artificial intelligence and greed. It was quite enjoyable, although the AI sounded off to me, and the ending definitely surprised me.
3 stars

Every Hill Ends With Sky was another of those just ok stories. It also narrates two different times and I had no clue how one world led to the other, so I felt like the story did not have much development at all. The ending was too bleak to be hopeful.
1.5 stars

She Just Looks That Way was more up my alley because it was a character-driven story. Although it was all a tad bizarre – both the crazy woman and the crazy willingness to risk blindness in order to get over her – and sappy, I was moved by the morale of the story.
3.25 stars

SIREN of Titan was an excellent approach on sentient machines. I thoroughly enjoyed the duality of how SIREN was perceived and how she actually felt. The ending was very touching. This was a near perfect short story.
4.75 stars

The Yoke of Inauspicious Stars was disappointing. What could have been a pretty cool sci-fi story was smothered by a Romeo and Juliet bad adaptation, where every now and then poetic lines would enter the narrative in a rather awkward manner. I wish certain aspects of that world would have been further developed, particularly the link between the technicians and the miners – I never understood why or how it worked like that, so intensely.
2 stars

Ambiguous Nature was ok. Mankind’s search for intelligent life and prime numbers being proof of such is not new. There was an interesting twist to it and the addition of a child character made things interesting as it usually does, but overall not a memorable story.
2.5 stars

The Mandelbrot Bet was quite surprising. I am not sure if it was exactly believable – the communication part at least – and the ending was quite bleak but I especially loved the dialogues, the intonation of the entire conversations; it was a very engaging, personal dynamic that softened all the hard theory.
3.75 stars

Recollection was so sad and so real. In a world where Alzheimer’s can be cured but the past’s memories cannot be restored, a man and his family struggle to deal with this new situation. The tension is palpable and you feel for everyone in the story.
4.5 stars

So, the final verdict. This anthology started out really well for me and there were some true gems in there, as well as an abundance of food for thought. However, during most of the rest of the tales I felt a bit lost due to it being really hard sci-fi and/or the writing style in some of them being truly off putting.
I do believe there is something for everyone’s taste here, as it addresses a very wide range of the sci-fi scope.
In the end, I believe fans of hard sci-fi will enjoy this a lot more than I did. I however need more than interesting science to grab my interest. Unfortunately, too much of this anthology felt like info dump and not nearly enough engaging story weaving for my personal taste.