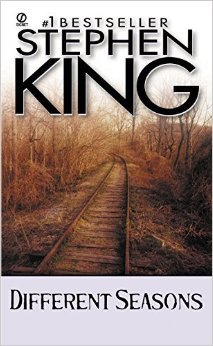 Four novellas by Stephen King which have his touch everywhere but cannot be classified as horror, per se.

The first story, Rita Hayworth and the Shawshank Redemption, was a reread for me and I had watched the movie a few times as well.
Even though I knew what was going to happen, King’s prose is so engaging I was immediately enthralled.
Putting Red as the narrator, making Dufresne almost a legend as he put it, was just brilliant. In the middle of describing how life in prison works and what it does to a man, we hear about how one man’s unwavering hope leads to a jaw-dropping ending and inspires everyone around him. This sort of narrative usually bores me to no end but this story reminds me why I love King’s work so much. I just could not look away and was interested in everything that happened.
All the characters had their own voice and there were hints here and there of what would happen and the way the story was wrapped up was beautiful.

I had not read the other three stories, nor watched the movies they were based on.

Apt Pupil caught me completely by surprise. The second I read about the main character, this apparently innocent, all-american 13-year-old boy who will not stop smiling, I was freaked out. Once I found out his macabre fascination, that feeling intensified. As the narrative advances and we watch him grow up, his life intertwined with the one of the man who calls himself Arthur Denke, I was the one who was fascinated and could not stop reading. The way the relationship between those two developed and the devolving of each of the characters reached a conclusion that left me wanting but was nonetheless fitting. It was a deeply disturbing, entertaining tale.

The Body is a coming of age story about 4 thirteen going on fourteen-year-old boys who discover the location of a dead body and journey on their way to find it. This adventure will make them grow in all sorts of ways.
I wasn’t as committed to this story as the others, probably because I was impatient, as there was this premise of kids finding a dead body of a boy their own age and they never seem to get to it already!
Also, I felt it rambled a bit, particularly when it concerned the narrator being an author. It’s not the first time King does this – inserting himself into the story somewhat – and it irked me that the guy kept mentioning that he was a big shot writer who made a lot of money, even addressing the person reading the story as gentle reader.
I enjoyed the story quite a lot, but there didn’t seem to be much ‘juice’ to it. It is an introspective story that makes you wonder about all sorts of things, although it did not make me feel as King’s fiction usually does. Obviously that is the point of these stories, they are different, and this one was very touching but those two things did hinder my enjoyment.

The Breathing Method comes the closest to typical King and it reminded me of a novel, I think by Peter Straub, which is probably why the story was dedicated to him.
The protagonist is in his 70s and is a very real character. There were little hints here and there about this mysterious club but I did not see the ending coming and I did not mind it one bit that it was left open to one’s imagination.
There is much more in between and even if I felt the prose was bit heavy at times the fact is the story was daunting, gruesome and even a bit beautiful.

In all four stories, we get references to other King’s work, some a bit of these stories themselves, which is something I always found intriguing and enthralling, as it is like it is all part of one big world. I highly recommend this collection, especially if you want to read something by Stephen King that is not the genre he was typed as.