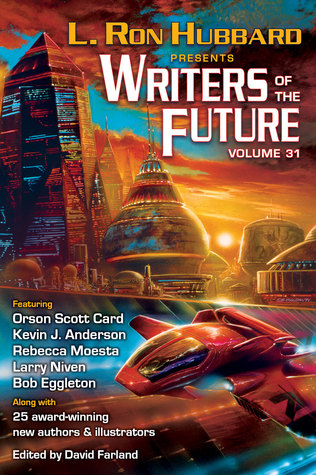 Title: Writers of the Future Volume 31

This collection is supposed to feature some of the best sci-fi short stories by non professional writers, supported by illustrations by promising artists and I have to tell you it does not disappoint. It is just a shame that I could not view them in all their splendour in my Kindle Paperwhite as they seemed truly amazing.

The anthology opens with a bang. Switch was amazing, easily a five star story, even though at some point there was too much action for my personal taste.
The main character’s development was superb and the world created here blew me away. I would really love to read a full-length novel of this. Unfortunately it seems even though the author has written it he has not had luck having it published.
The writing is right up my alley. The author does not waste time with unnecessary flourishes nor long winded details and yet is able to paint the picture so clearly, grasping the reader’s attention.
I was truly impressed. I absolutely loved the sci-fi stuff, the complexity of the character, the fast paced development of the narrative and the touching, bittersweet ending.

It is impossible that the author of The Dog Whisperer has not seen Cesar Milan’s show, of which I am a huge fan. What a witty story! Such a wonderful play on it, not just the title. It is so wonderfully, quirkily believable, with an Alice in Wonderland sort of feel. So short and yet so satisfying. Full 5 stars as well!

Stars That Make Dark Heaven Light by Sharon Joss is probably the longest story of the bunch and it stands well on its own. Humans colonising other planets and genetically changing to adapt is not a new concept but this novella takes it to a new level, with Darwin quotes on the spaceships and several other particularities. I have to admit I did not see the development coming and while I began by twisting my nose at it, I opened my mind to it and you know what? It’s great sci-fi. I am still not entirely sold on some things but as a whole this story was very well achieved. 4.75 stars.

Art was, in my opinion, unnecessary. A clinical article such as this has no room amongst short stories. Perhaps as an introduction to the anthology but never here. I found it boring and out of context.

When Shadows Fall did not impress me in the least for quite a while, other than the fact that it portrayed an Earth more ruined than I had ever read about. I didn’t even know how people could survive in such conditions and I had trouble remembering the characters.
In the end it turned out to be a story told in the way of a parable, about greed, past offences, what it takes to get past them and who is willing to get it done. Quite beautiful, really. 4.25 stars.

A Revolutionary Guide to Practical Conjuration was not one of my favourites. I did not much care for the characters or story. Every time it seemed it was about to get interesting, there was a lot of info dumping. I liked the idea of an interactive book but that was about it.
The character evolution did not make sense to me either, as he never seemed particularly bright, which the plot twist near the end required.
I didn’t get the ending. So the Demon goes back to the book but it seems it keeps doing what Abe asked because bones were delivered to what’s their name. That means it will be free again when everything Abe mentioned is done, right? Meh. 2.5 stars.

Twelve minutes to Vinh Quang was surprising! The story had a tense build up which culminated quite unexpectedly – for me, at least. I loved how the sci-fi gadgets were introduced noncommittally and how the characters’ roles progressively reversed.
I even loved the old lady.
It was a very entertaining story without superfluous flourishes but which still managed to feel complete, well put together and very real. This is a great example of great sci-fi, when a story is obviously futuristic but you feel like you could be there and all that stuff could be happening. 5 stars.

Planar Ghosts takes place in a bleak post-apocalyptic world. I could not connect to it. The world, characters or story just did not even tickle me entertained. The idea of it could have been interesting and the plot twist was ok but in the end it was just a little below average. 2 stars

Fiction on Paper is a non-fiction text written by Orson Scott Card. It starts off really well, with an analysis on how writing and the various forms of writing have evolved over the years; how reading is becoming less and less sought out as a form of entertaining when there are so many instant alternatives out there that do not require imagination. Then it turns into a self-eulogy of the Writers of the Future anthology and how it is the absolute best platform to launch new sci-fi and fantasy writers. Again, that struck me as unnecessary. 2.75/5 stars

The idea for Rough Draft told in the author’s bio was almost more interesting than the story itself. The fact is it asks for quite a lot of suspension of disbelief. We are presented to a world where travelling to parallel universities is normal and I felt I did not get a solid enough foundation for that. Also, as intricate as it seemed to be to the society, the law system sure didn’t make sense.
I found the premise not that interesting. The time-travel company brings a book from another university that was never published in this one and the author, who turned into a hermit after one hit, does not like it one bit. The narrative unfurls as you would expect, with no real surprises. It has value merely as an inspiring, motivational tale. 2.5 stars

Between Screens reminded me a bit of A Clockwork Orange, oddly enough. A group of kids with their own language up to no good, skipping around in Space.
I didn’t really get how it worked because the viewings were described as live but yet the characters seemed to have seen it before, but it was an interesting tale and the character’s (d)evolution was rather unsettling. I felt the skipping was overwhelming and that I wanted more backstory but that is a very personal opinion, as there really was a bit of everything, it was a balanced story. A dark, intense story. 4.25 stars

Unrefined did not work for me at all. Corporate, hard sci-fi is just not my thing. It started out exhaustingly descriptive, with a lot of tell and not nearly enough show, and it evolved into a weird narrative full of motivational speeches and stilted dialogues, with a main character I could never find interesting. Nuh huh. 1.5 stars

Half Past was a lovely short story, very well written and with an interesting premise. Externalising strong emotions in such a way is so clever!
The plot twist was surprising but it did not quite fit in the rest of the story for me. If Elizabeth says Echoes stick to the same place and are stuck in time, how come she gets to roam around the entire house and premises and interact with other Echoes while they seem so isolated? Also, is she perpetually about to leave but never does? How does she account for that? I can’t even imagine what that father must have felt like, stuck in a house with those crazies for so many years. It was still a wonderful fantasy tale and I give it 4 stars.

Purposes Made for Alien Minds features a humanoid creature that can only think and speak in 5 worded sentences. The entire thing felt like a challenge the author put himself up to, to write an enthralling story only 5 words at a time. In my opinion, it didn’t work. Not only did I keep having brainfreezes, the story would go round and round and it just wasn’t worth it. 1 star

Inconstant Moon is an okay apocalyptic tale. I felt the sense of doom but there was nothing there that made me go ‘wow’. 2.75 stars

The Illustrators of the Future is a text about the importance of illustrators and more self-praise to the anthology.

The Graver is easily the most emotional story in the anthology. It started really well, with all the fantasy, sci-fi and supernatural elements inherent to the story being introduced in a very organic manner. The resolution itself did not wow me but all the elements make for a very good story indeed. 4.5 stars

Wisteria Melancholy features such a curious notion – that when people are emotionally disturbed they experience morphological changes. The concept and context was introduced very well, no info dumping, all very natural. Then as it developed I lost a bit of interest and I can’t even really tell you why. It’s like there’s this concept that is so cool that I wish more had been done with it and that even though it depends on the characters being emotional, how it was done was just not appealing to me. Much like the ending, it left me wanting. Also, I would have liked to see or at least hear about more morphological changes – invisibility is so overdone at this point.
However, I still found the concept very intriguing and had fun reading it. 4.25 stars

Poseidon’s Eyes was enthralling on several levels – the setting, the spirits, the characters… It bothered me I didn’t get that the main character was female until about half through the story and there were minor things here and there but overall it was excellent. 4.75 stars

On the Direction of Art, along with the other two texts, is what makes me want to bring the rating down even more. I just feel that these texts have no place in such an anthology. In my opinion, self-gratifying eulogies along with essays on the importance of reuniting writers and illustrators of sci-fi and fantasy are fine on the back cover, introduction and/or as a way to promote the anthology, but taking up space in itself just feels unnecessary and redundant.

Overall I enjoyed the short stories quite a lot and it has got to be one of the best collections of the genre I have read.

One thought on “Writers of the Future Volume 31”