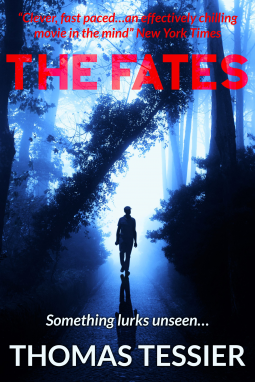 A series of odd events occur in small town Millville.
At first it was just small things like fluttering paper with no discernible cause but then deaths start coming up.
What could be causing them? Is it pollution? Aliens? A religious phenomenon?

The Fates was quite different from what I usually read. I was very intrigued.

However, there were a lot of characters. For the first fifth of the book we are bombarded with new characters and new situations.

Then they start coming together and things pick up a bit but I still found the pace fairly slow because there were just too many characters to keep track of and not much was happening.

The point of view changed constantly in the same chapter and the ARC needs thorough revision. Not only were the subchapters not easily separated but there were several words mistyped, such as bam instead of barn and modem instead of modern or fed instead of feed, and a serious lack of punctuation.

Storywise, there were a few attempts to liven things up and shock the reader, such as mentions of bestiality, but for the most part I kept wanting something new to happen and some answers to be given.

Overall, I thought it was an interesting and even thought provoking book but it came across as an essay on how people would react when they were faced with something they could not comprehend and that just isn’t enough to make a book stand in my opinion, let alone with such a poor resolution.

One thought on “The Fates”