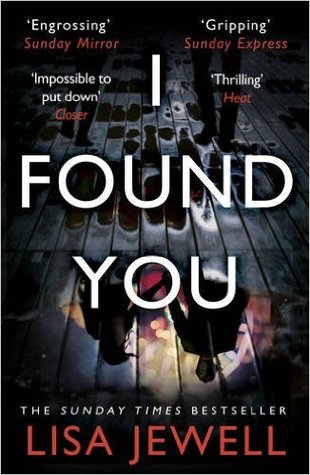 Title: I Found You

In East Yorkshire, Alice, a single mother of three, finds a man sitting on the beach in the middle of the pouring rain wearing nothing but a shirt and jeans. Against her better judgement, she takes him in, after finding out that he does not remember who he is.
At the same time, at Surrey, Lily’s husband goes missing. They have only been married for a couple of weeks and she does not know much about him but she knows he would not just leave like this.
Who is this lost man and how does his past relate to the two stories?

I Found You started out really well. The writing was very engaging.

I found myself enjoying the chapters about Alice more because she seemed more real, even though she was obviously a bit off in the head:
And even if (…) he’s killed someone, he’d have a good reason for it; she knows he would.
Often saying she knew she was didn’t exactly help, it was just stating the obvious.
It was that realising things well before the character did that threw me off a bit. I mean, it took her forever to really grasp that she was putting her children’s life in danger by bringing in a complete stranger.

There were things that didn’t add up like how on earth she could support herself and three children and an unexpected guest just by selling her art occasionally.
Still, I enjoyed several aspects of this character, particularly her parents and everything she needed to deal with. It was refreshing to read about 40 year-old characters, their daily lives and concerns.

Lily on the other hand, I struggled to relate to. I just don’t get why a 21-year-old would move to another country, without money, without family, not even knowing her fiancé’s family or really much about him – or anyone else in that country, for that matter. It just didn’t seem realistic, fully relying on a single person to survive. And not having any money because Carl payed for everything? Nah, just doesn’t seem feasible. And, again, it took her forever to realise what I had grasped within a few lines.

I did appreciate viewing things at a foreigner’s point of view, since I am not native to the English culture and do find myself wondering about stuff that is so familiar to them.

After that, we get introduced to more characters – brother Gray, sister Kirstie and mysterious Mark – and things get even more interesting. The way the chapters ended made me want to know what came next and I looked forward to finding out how all three storylines would progress.

The way that we are told they are two separate missing men is very well achieved, with innocuous clues here and there. And even the whole memory loss thing, which is so popular in psychological thrillers these days, was quite convincing.

I did anticipate most of the revelations but as the book’s end approached I was surprised on a couple of occasions and appreciate how it wrapped up to the book’s title in the final lines – these days, often times I find myself wondering how a book’s title was picked. Most of them are just so generic. No wonder I can’t remember most titles when thinking of a particular character or storyline. I think this one, simple as it is, will stick with me.

As a note, the ARC’s quality was a disappointment. I am used to not having a chapter index but incomplete words were a first. Sometimes letters were missing in the middle of words, other times the beginning or end, and I had to guess based on context. Most times I could do that, others not so much.

All in all, I Found You was quite enjoyable. Not the most amazing thriller I have read but very enjoyable and I wanted to know what happened to all characters. Recommended.