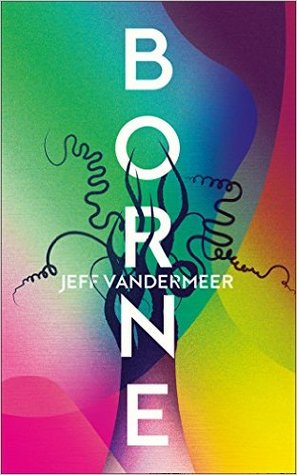 In a ruined, nameless city of the future, a woman named Rachel, who makes her living as a scavenger, finds a creature she names “Borne” entangled in the fur of Mord, a gigantic, despotic bear. Mord once prowled the corridors of the biotech organization known as the Company, which lies at the outskirts of the city, until he was experimented on, grew large, learned to fly and broke free. Driven insane by his torture at the Company, Mord terrorizes the city even as he provides sustenance for scavengers like Rachel.

OK, I have to admit it straight out – I am shallow and got this mostly because of the cover. I mean, how gorgeous is that? Mesmerising, really. And such a contrast to the world created here, which is completely bleak.

I had read a previous book by the author and I ended up having much of the same feelings while reading Borne. You see, Mr VanderMeer wants to take you on a journey to discover and experience the wonderful worlds he creates and at times I felt completely enthralled. I particularly really loved Borne’s personality. So like a child, eager to know what was around him.

However, in other instances the writing threw me off and again I wished I had had more explanations. Rachel’s narration style could be quite odd in my opinion and I especially disliked her soliloquy about being a ghost and constantly referring to herself in the third person – or rather this other side of her. It wore me out after a while. As this example, there were some parts I could have done without, as I felt they dragged the book on. Still, there is beauty in all.

As my previous experience, as we come towards the end of the book explanations are hinted at but not given and that also left me unsatisfied.
Still, it was an incredibly imaginative world, with biotech and modified creatures and children – there’s even a flying bear in it, for crying out loud, and the author manages to not make it look silly – and you cannot help to be sucked in by the amazingly complex writing, that carries so much meaning, albeit taking quite a lot longer to go through than I had expected.