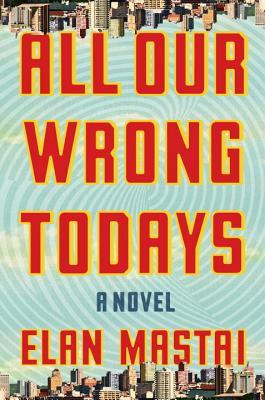 Title: All Our Wrong Todays

Tom lives in a world quite close to what we pictured the future would be like back in the 50s. Technology is so advanced that Tom’s father actually manages to build a time machine. Tom travels back in time to witness the moment where the future began but things get so messy that when he goes back to 2016 it’s no longer his world. It’s the world as we know it. Can Tom go back and fix what he did wrong? Can he fix the past so that his world can exist again?

I had a really good time reading this. I found it refreshing that the narrator was an ordinary guy who screws up a lot and throughout the book has normal reactions, he doesn’t just turn into this amazing hero just because he is the main character of a book and needs to show evolution. So in such a bizarre scenario I actually found Tom Barren quite normal. And his sense of humour contributed quite positively to the character.

The other thing I loved about the book was the pace. You don’t just get backstory dumped, the story flows and you are there every step of the way, and there are twists quite early on, as early as a quarter into the book, if I remember correctly. Everything attests to the character of Tom and his evolution, and will sooner or later be picked back up, but at the same time you are being entertained, not just reading lengthy descriptions but actually watching stuff happen.

There isn’t much hard sci-fi until later in the book and I found the semi-explanations satisfying because, again, Tom is a normal dude, he is not supposed to know how all this works.

Towards the end I gradually lost interest both because of the hard sci-fi, Tom’s decision that it was not possible to save his world, he didn’t even try and I still don’t get why and things just got really complicated, not sure if I buy into all of it but… It still wrapped up nicely. The writing got a bit gushy for my taste but it does make sense and I was pleased.

All Our Wrong Todays is quite a ride, but a good one. There is humour, failure, different ways to deal with failure, so a lot of personal growth involved, and I have to say I got emotionally involved with the story to the point where I truly cared about what happened to the characters. At the same time it is a thought-provoking book, in more ways than one. I wish I had highlighted some passages because they would make some really nifty quotes.
You should definitely pick it up.

Disclaimer: I would like to thank the publisher and Edelweiss for providing me a free copy of this book in exchange for my honest review.

3 thoughts on “All Our Wrong Todays”