In the prologue of this book we are introduced to our main character at the age of 11, when the phenomenon dubbed the Great Baldification occurred.
In present day, our 36 year old Nick has a love of cameras, and makes is living trying to beautify baldness. He makes movies alongside his friend Larry, a filthy rich guy who seems to have no limit when looking for thrills, if they involve pretty girls.

So as we follow Nick and Larry around, through China and America, we are taken on an adventure which will take some quite grisly contours. What caused the Great Baldification? How exactly did it affect world culture? How did it change vanity, for instance?
The book poses these questions and many more.

It is way too long. It didn’t need all those testimonies; it was sufficient to mention the prizes it won/was nominated for. The description of the book itself is well achieved; it doesn’t say too much, but still serves to pique the reader’s interest. That and the cover is what caught my attention, not the wall of a couple of people’s opinions, no matter how ‘important’ they are.

The writing is generally very good. There were a few words I did not know, which served to increase my vocabulary (yay for Kindle dictionary!), but even without looking them up I could mostly tell their meaning by the context. So it was clear, engaging writing.

I must admit I found the opening line quite powerful, as well as the events which followed. I did think that the prologue should have stopped at that time, instead of jumping forward 25 years.
I also think the chapters should have been shorter; even though they were subdivided, it would have been better for easier navigational purposes around the e-book.

This is the real strength of the book.
While I could have used some more background info on how the world got the way it was when Nick was 11, the world development after that was very, very good. When I got through the first couple of chapters I was completely baffled by what I was reading but could totally see it happening in the future, and more interesting titbits are revealed throughout the book.

I am not going to tell you much because I don’t like writing spoilers, but what I will tell you is that this dystopia takes place in a world unlike any other I have read in a long, long time, if ever. The world has not regressed to its more natural state; nope, there’s plenty of technology and pollution and the way we are taken on this trip is completely believable.

Overall the characters were pretty well developed, but mostly the main ones. We got to know why they were the way they were, and the information was fed quite well. There was some repetitiveness, particularly about Linda, but it was not too overwhelming.
After chapter 5 or so I started to experience some bumps on the road, particularly with Nick. But soon enough the book had grasped me again.

This is what ended up lowering my rating. While I was completely enthralled by the writing and world creation, some things did feel off character and rushed, especially the last chapter. It was sort of like watching a blockbuster movie – the glitzy effects distract you from plot. There is a lot I would have like seen explained and to which I did not get enough closure.

Also, when I am reading a book, for it to completely grip me I have to feel what the character is feeling, that his or her actions make complete sense and I would make the same decisions. I did not feel that here one too many times. The plot would deviate to a direction I did not feel made much sense, especially because there were better alternatives.

I think I have been unknowingly avoiding literature with eastern influences for fear of not getting it, that it would be too out there for me. Peter Tieryas Liu turned out to be the perfect author for me, because he meshes eastern and western influences so brilliantly, and I will definitely want to dig my nails into the rest of his work.

While I initially thought I would be giving this book 5 stars but ended up having to lower it because I did finish it feeling a tad disappointed, the fact is this author’s imagination completely blew me away. I have no idea how he thought of some of the things in this book, but I can totally see them happening, the way the world is headed.

And the cricket fights… Boy, the cricket fights!! Who am I kidding, that is probably mostly why I decided to round the rating up instead of down, since GR does not do half stars.
That and because I was so impressed by the writing, the setting and the fact that this book is just so thought provoking. Despite the disappointing parts, it was still a rollercoaster of emotions, so I recommend that you read it.

For more specifics on what I felt disappointed about please read the spoilers in Book Lair’s buddy read of this book by clicking here. 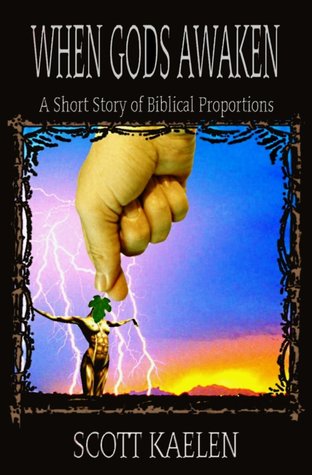 When Gods Awaken: A Short Story of Biblical Proportions
by Scott Kaelen

This book is a satire, a play on Creationism. I liked the beginning, the idea of an Observer, of everything being reborn over and over again after we messed up. And then it all just went downhill for me.

Queue a capricious, oblivious, utterly dumb creator (as expected in a satire of religion) and a sassy, know-it-all first man (I’m sure a lot of people would love the chance to talk back to their Creator like that but those don’t actually believe in one, which is kind of the point of the book undoubtedly), who apparently is not the first man – he knows it, his creator knows it… And a bunch of other dialogues that pretty much depict how a person these days would feel/act/speak in those days.

There’s quite a lot of foul language, smartassery and references to Lord of the Rings, Stargate – other stuff I could not identify, I am sure or just do not remember – that are somewhat funny. On the other hand, other stuff was just too silly to me even for a satire and some interpretations, apparently by the author himself at the end of the book, utterly disgusted me.

I have to say I was a bit disappointed. Well, very disappointed. By reading the synopsis, I knew I was going to read something that suggested an alternative explanation to what Christianity teaches but I expected a more or less linear, unbiased story, one that had a beginning, middle and end and which explained the alternative reality, and most of all something that would call to both scholars and laymen. Instead I’m feeling at an utter loss.

I am sure atheists who are well informed on the Bible will get a kick out of this. Personally, I don’t even recognize some passages. Overall, the book felt disconnected to me and although I like to think I have some sense of humour and can be extremely sarcastic, at the end of the day I was just confused and the end sort of turned into a mockery of a theological discussion. I guess it’s just not my cup of tea.